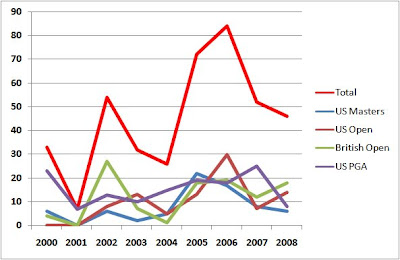 Yesterday, Aussie Golfer wondered whether 2008 was not just a bad year from Australian sport but a bad year for Australian golf at the most prestigious events, the four golf majors. Could we measure the Australians results somehow to compare performances on a year by year basis? I applied the point scoring system below to each major going back to the year 2000 and the fancy looking graph shown above is what I got!

Now remember, I’m not concerned with the amount of Australians entering the majors which is no doubt on the rise. I’m only concerned with answering two questions:

1) Was last year bad for Australians at the majors?
2) Is now the best time to be watching the majors with respect to Aussie success?

The answers appear to be yes and……maybe not.

There’s no doubt 2006 was a great year with Geoff Ogilvy’s win at the US Open (combined with 3 more Top 20 finishes) . Adam Scott (3rd at PGA) and Robert Allenby also had great years finishing Top 30 every major.

2008 was definitely a bad year for the Aussies with Greg Norman and Robert Allenby doing well at the British Open (3rd and 7th respectively) and Geoff Ogilvy finishing Top 10 at the US Open. John Senden and Geoff Ogilvy saved 2007 from being an absolute disaster by playing some good golf in the US PGA Championship.

There’s a few things that can be gleaned from all this:

Tomorrow I’ll outline which major has been the kindest to Australian golfers this century. It may surprise.

One thought on “Australians at the Majors: The Analysis”