1. Adam Scott is a genuine golfing superstar
A lot of people questioned whether Scott could bounce back from the heartbreak at Royal Lytham at last year’s Open Championship and he proved to everyone, and himself that he could.

He must have had thoughts of his final four hole capitulation in the back of his mind on Sunday but we didn’t see any sign of it.

Scott was often listed as one of the best golfer’s never to win a major. He no longer appears on that list.

2. There are more golf fans in Australia than what TV networks realise
Channel Ten and/or OneHD are in their final year of the contract to broadcast the majors into Australia on free-to-air TV and by all reports, won’t be renewing it.

Scott’s victory seemed to transcend just golf fans and all Australian sports fanatics seemed to appreciate the gravity of the feat.

I do wonder if free-to-air networks are re-thinking their plan to ditch golf in light of Adam Scott’s victory. Ideally we want every kid in the country to have access to see all of the major golf tournaments, at the very least.
Darius Oliver wrote a great piece on the issue that should be read, especially by those at Golf Australia and the PGA of Australia. 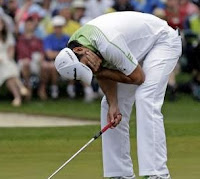 3. Jason Day looks set to win a major
Day will rue a huge opportunity to win The Masters, thanks largely to his poor finish on Saturday and a couple of errant shots coming home on Sunday.

He chalked up his third top-5 finish in ten appearances at major golf tournaments. At just 25 years of age the experience will be invaluable and you would expect him to win one in the coming years.

4. Slow penalties are reserved for the privileged few
And speaking of slow golfers, 14-year-old Tianlang Guan was given several warnings for slow play on Friday and was eventually handed a 2-stroke penalty.

For a kid to be singled out in his first major was a pretty rough call. Especially considering the wealth of golfers who exhibit all the traits of slow play week-in, week-out on the professional tours.

5. Steve Williams can read putts
If Scott hadn’t made the putt at the second playoff hole, he and Cabrera would have almost certainly had to return the next day as the light was fading and it was becoming increasingly difficult to see.

Scott had a lot of difficulty reading the final putt and consulted Steve Williams for his opinion. Something he doesn’t usually do.

Scott asked if he agreed that the putt broke by a cup. Williams disagreed and said it was more like two cups. Scott backed his man on the bag and Williams has now caddied for 14 major victories.

6. Tiger Woods doesn’t know the rules of golf
The 2013 Masters took an even more controversial turn when it appeared Tiger Woods was set for disqualification for an incorrect drop at the 15th hole on Friday.

Woods just assumed he could drop the ball as far back as he wanted from it’s original position and a phone call from a TV viewer alerted rules officials to the indiscretion.They made a mistake by not deeming it illegal on Friday and were forced to waive disqualification and handed Woods a two-stroke penalty.

Interestingly, had the TV viewer not alerted officials on Friday, officials would not have reviewed the incident then and Woods would have been disqualified on Saturday morning. 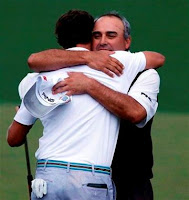 7. Angel Cabrera is an incredibly gracious loserArgentinian Angel Cabrera won the Masters in 2009 but it didn’t seem to make him any less hungry for another green jacket. El Pato was coming down the stretch and with his son on the bag, it appeared on several occasions that he would make it his third major victory.

Despite a near miss chip-in on the first playoff hole and an equally unlucky missed putt on the second, 43-year-old Cabrera accepted defeat like the champion he is. He embraced Adam Scott as his defeat was etched into history and graciously bowed out of the limelight.

I really hope Cabrera can make the Presidents Cup team. His experience will be invaluable and the thought of pairing him with Scotty would be a great combination.

8. Marc Leishman can mix it with the best under pressure
All weekend we were assuming Leishman would fade into the chasing pack and out of the tournament coverage, but it didn’t happen. Leishman kept making birdies on the back of bogeys to stay well in the hunt for the green jacket.

Only a bad approach shot on the 15th, when he needed to force a few birdies did Leishman fall out of contention. A pretty impressive effort that puts him into the field for next year.

9. Thorbjorn Olesen is going to be a gun
Denmark’s Thorbjorn Olesen bounced back from an opening round 78 to finish in a tie for sixth place in his first appearance at Augusta. He now has two top-10s under his belt in three majors.

At just 23 years of age, Olesen is a future superstar. Keep an eye on him.

The stats don’t say that Scott putted very well at all. Apart from the two crucial putts he made on the final three holes he played, he barely made anything all day. One can only wonder how he would have putted with a short putter.